This guidance is intended to provide horse and pony owners and keepers with some basic advice on species of worms that affect horses and measures that can be taken to reduce pasture parasite burdens. Each situation is different and individual advice should be sought from us at Wern Vets before embarking on a worm program for your horse.

Most horse owners are aware of the need to worm their horses on a regular basis. Almost every horse alive will have at least one parasitic worm in its body. It is important to realise that often these worms are present in low numbers and cause the horse no ill effects. However if the worm burden reaches a significant level, symptoms such as weight loss, diarrhoea and general 'unthriftiness' may develop. Large numbers of some species of worm are also associated with potentially life-threatening conditions. It is therefore clear that control of these worms is important to the welfare of the horse. Most of the worms that affect horses have a broadly similar life cycle. Typically the horse swallows the worm larvae from the pasture, the larvae then spend a period of time developing within the horse before reaching adulthood within the bowel. The worms then produce eggs that are passed in the dung onto the pasture. Under warm conditions these eggs hatch into the infective larvae again. It is therefore possible to estimate the burden of worms a horse is carrying by counting the number of eggs in the droppings (known as a faecal worm egg count). Exceptions to this rule are the small round worms (Cyathastomes) and tapeworms (cestodes) which do not follow this basic life cycle and can’t be detected by routine faecal egg counts.

There are many species of worms that affect horses, but the most important ones are listed below.

These are the type of worm which in the past owners and vets were most concerned about. The life cycle of these species involves migration of larvae from the bowel into the abdomen, before returning back to the bowel as adult worms. These worms may be associated with general signs of malaise; but one species, Strongylus vulgaris, migrates specifically to the arteries supplying the bowel and can cause obstruction to the blood flow, resulting in a serious form of colic sometimes necessitating surgery. Modern worming regimes are usually very effective at killing these species and so recently their significance has diminished. 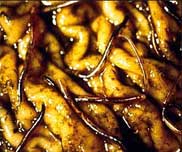 As the significance of large red worms has declined over the past twenty years or so, the problems associated with this group of worms seem to have dramatically escalated. This is due in part to their relatively short life cycle, but is also a consequence of the ability of these worms to develop resistance to modern wormers. This problem of resistance is compounded by the tendency of these worms to "hibernate" in the lining of the bowel. When a horse swallows Cyathastomes larvae from the pasture, the larvae develop within the lining of the bowel and then re-emerge as adults. However a proportion remains within the lining and may remain there for years. Whilst hibernating these inhibited larvae are resistant to many types of wormer. The larvae then re-emerge, often at the end of winter and this re-emergence may involve large numbers at the same time, resulting in enormous damage to the bowel wall, which may even prove to be fatal. 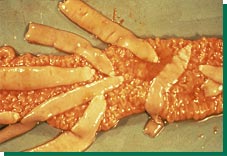 These worms are less likely to cause problems compared to the red worms, however they are a potential cause of colic. Tapeworm eggs are not usually detected in dung samples, but a blood test is available.

Donkeys are the natural host for these worms, and don't usually show any symptoms. However horses grazing in the same field, or in a field previously grazed by donkeys, may also be affected. The worm does not usually complete its life cycle in the horse and so is not often detectable by faecal worm counts. Horses affected with significant numbers of this worm cough due to the presence of the larvae within the lungs. 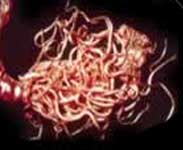 Usually affect young horses only, typically foals and yearlings. Despite this worm being an intestinal parasite, infestation often results in coughing. This is due to the larvae migrating through the lung on their way to the intestine.

No significant disease implications but can cause irritation to the horse around the anus.

In truth these aren't really anything to do with worms, but are often put into the same category by owners. Bots are the larval stage of a certain species of fly. This fly lays its eggs on the horse's coat, often around the forelegs and neck, which the horse then swallows when it grooms itself. The eggs then develop and the larvae remain in the stomach, until they are passed in the dung as pupae. Finding these pupae in the dung may be distasteful, however it is very rare for bots to cause any medical problems.

How Do You Reduce The Worm Burden In a Horse Without The Use Of Drugs?

The principle of managemental control of parasites is to prevent pasture contamination, thereby preventing the parasite from completing its life cycle in the host. The easiest way to implement this strategy in horses is to prevent horses having contact with contaminated pasture or feed. Horses that graze pasture are likely to encounter many infective parasite larvae which they will inadvertently ingest as they graze. All of the following factors will increase the daily infective dose that a grazing horse ingests:

Collection of droppings from paddocks is a simple way of preventing the spread of worms regular removal of droppings from the pasture. Twice weekly is the suggested frequency. Scientific studies have demonstrated that this is an extremely effective method of suppressing faecal egg counts in grazing horses. A disadvantage is that it is labour-intensive.

This allows infective eggs and larvae on "resting" pasture to die before they can infect another horse. A minimum rest period of three months is recommended.

Mixed species grazing. Cattle and sheep will act as "biological vacuum cleaners," eating eggs and larvae which can not survive in species other than the horse.

Do not over-stock pasture.

Ideally, fields should contain no more than one or two horses per acre. Increasing this number, leads to horses grazing closer to dung piles and to close-cropped grass

What Are The Different Worm Control Strategies?

Do I Need to Worm My Horse?

It has been shown in surveys that most owners worm their horses frequently enough to prevent a significant worm burden developing. However, it would seem that often the decision as to which wormer to use is made on the basis of advertising or cost. Anybody that has looked into worming control strategies will know that it is not straightforward. The bewildering array of information and recommendations coming from drug companies indicates that there is no single, simple solution to these problems. The specific problems that horse owners face are:

The use of drugs has been the mainstay of parasite control for many years. The rationale behind the use of worming drugs was to kill the egg laying adult parasites and thereby minimise pasture contamination. Worming drugs can be used in a number of different ways:

1.Interval dosing
This strategy involves the administration of a specific drug at regular time intervals during the high-risk, summer grazing period. Some horse owners continue to dose their animals at the same frequency during the lower-risk winter period or when stabled for most of the day. This is expensive and often unnecessary. Furthermore, many horse owners use worming drugs at inappropriate intervals, e.g. monthly use of Ivermectin, which is unjustified scientifically. The over-use of worming drugs increases the speed at which parasites will develop resistance to the drugs. The table indicates the manufacturers recommended dosing intervals.

2.Strategic dosing
The use of worming drugs at specific times of year to disrupt the seasonal cycle of transmission has been widely and effectively employed in farm animal practice. The seasonality of horse parasites suggests that strategic dosing at turnout, in the middle of the grazing season and again in the autumn is a rational approach to parasite control. Problems can arise with such a system in years with abnormal weather patterns leading to early or late peak pasture larval burdens. Such a system is susceptible to breakdown if heavily parasitised horses are added to the population. Also, the fact that horses do not develop a significant degree of protective immunity, and the fact that they graze in mixed age groups, make this method more difficult to institute.

3.Targeted strategic dosing.
This is a modification of the strategic dosing system. Strategic dosing is employed to suppress pasture contamination at critical times of the year, but all horses have faecal egg counts performed prior to dosing. This can be done if a fresh faecal sample is bought to Wern Vets.) Treatment is then targeted at animals with significant (>200 eggs/gram) adult parasite burdens. Diagnostic limitations mean that Small red worms in the gut wall can not be detected by faecal egg counts so such a regimen must include larvicidal dosing of horses. Some wormers lack efficacy against mucosal larvae in a state of arrested development. Therefore, it is important that these stages are not allowed to build up in large numbers in the intestinal wall of horses. Anti-tapeworm treatments can also be targeted by identification of significantly infected animals using a blood test for tapeworm.

Traditionally owners worm their horses according to a routine, with a set interval between doses (shown in the table below) and maybe some treatments at certain times of year targeting specific species of worm. If this system is being used, there are two golden rules to slow the development of worm resistance.

A Guide To The Different Wormers On The Market.

From this article I’m sure that if you have not learnt anything you have probably learnt that the subject of worming horses is not an easy one to make practical sense and use of. Each horse is different and therefore each horse should require a different approach to worming. Many drug companies will have their own worming protocols for their products.
Specific treatments that should not be missed and should be included into any worming program are.

For further and more specific and targeted approach to worming your individual horses and ponies why not call and make an appointment with a vet to discuss your individual circumstances or ask one of our vets during your horse or pony’s annual vaccination visits.